most girls (and some guys??) goes through some kind of boy band loving phase in their teens... even if they won't admit to it. they listen to "cool" music, but secretly pull out the cheesy boy band music out from under their bed when no one is around...

anyways. i grew up in the New Kids on the Block frenzy. for whatever reason, i never got into it. then there was Backstreet Boys... i went to an autograph signing and one concert... but it never stuck. again, not into it.

N*Sync was my N. American boy band of choice... but they came nowhere near my love for Take That.

you are probably why i am bothering to write about this, since most of you don't know who they are... or more importantly, don't care. in a nutshell, they were the European answer to NKOTB.

basically, after almost 10 years apart, they have reunited with estranged band member, Robbie Williams. they are going to venture out on tour to promote a new album...

i guess this news just made me reminisce over what, at the time, was a huge deal to me. i had posters covering every inch of my walls, collected merchandise, wrote to penpals (yes, PENPALS!!! the internet wasn't really much then!) and listened to their music all day and night.

i guess you could say that, when i like something... i like it a lot. i love it. and i immerse myself in everything to do with it.

anyhoo. i listened to them in the car on the way to work this morning... i miss them!

ok. that's the end of this strange boy band rant! 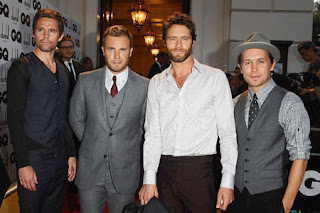