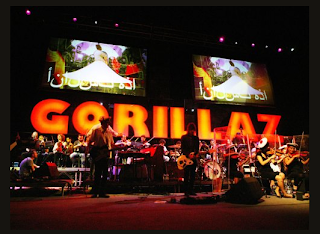 yesterday i was lucky enough to have 2 tickets to the Gorillaz show @ the ACC offered to me last minute (thank you Daniela!!!). i was informed that N*E*R*D was opening, so i said yes immediately... Book was my partner & crime for the event (B: hello! giant x rips in the shirt!)

Pharrell & co were good... but the crowd wasn't really in agreement. this was a solid Gorillaz only crowd. even "Rockstar" didn't get much of a rise out of them. the positive: it sounds like there are going to be some really good tracks on the 4th album "Nothing". i'm excited! negative: Pharrell's bizarre "you can change the world" rant/song finale & his weird catcher's vest ensemble. was he going to "catch balls"? har har har.

(one more thing... where the hell was Chad Hugo? i've seen N*E*R*D a ton of times and he's never around... is he just a figment of my imagination???)

anyhoo. i was totally prepared to leave before the Gorillaz came on... not because i dislike them, but because i didn't consider myself a fan and don't know enough of their songs. anyhoo... we decided to stay for a few songs and i'm glad i did! naturally, they had a large screen with the cartoon versions of Damon Albarn & friends behind them... but that was just the tip of the iceburg. there was never a dull moment... surprise appearances started early and kept going... Hypnotic Brass Ensemble, De La Soul, Bootie Brown, etc. the band was awesome too. it seemed like there were a million musicians on stage at any given time!

Damon has sure come a long way since Girls and Boys!!!
Posted by killa at 11:24 AM