i introduced the office to the wonders of Mappy. its basically a game with a mouse (dressed like a police officer) jumping on trampolines in a mansion, collecting stolen goods while little cats chase him. yeah, ok i didn't invent the damn game, so don't ask me... ha.

Bryce was particularly bad at it until he took it home for the weekend and decided to crack the code of high scores... and show me up at the office. 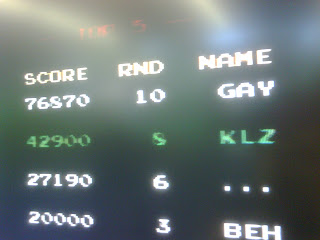