saturday night was one of those nights i really look forward to... a night in with the girls. being lazy, wearing bummy clothes (i still look cute tho, don't get it twisted) and eating lots of junkfood.

and lets not forget all the trashy girltalk!!!

we went to my girlfriend jackie's house... it was just 3 of us (my bff jen came over too) and we tried to include melissa via MSN, shes working in Dubai now (hi melissa!!!). then around midnight we called michelle to wish her a happy birthday and begged her to come by to feast on the junkfood... and a homemade bday cake :)

jackie's Rockband disc wouldn't work... so we forced the birthday girl to bring hers. AND her SingStar game. i love that game (www.us.playstation.com/singstar) so much. even though i mildly suck at singing (UNDERSTATEMENT) i have lots of fun... you can even battle eachother! i was sort of the champion of the night (i disqualified michelle for being the owner of the game and knowing every damn song)


i also don't have the girliest voice... so i have a lot of trouble with the girl songs (couldn't sing Destiny's Child, Rihanna or Alicia Keys) but i kicked ass in boy songs (Hoobastank, The Killers, All American Rejects) 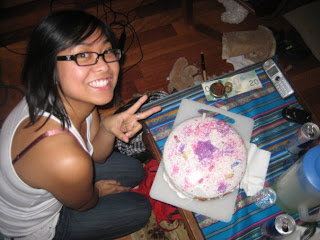 michelle and her homemade birthday cake! (vanilla, the best kind! with the *secret ingredient* too ;) 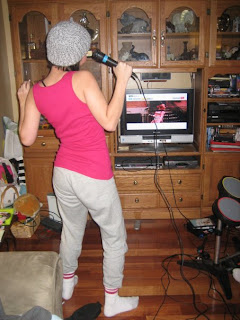 yeah, that'd be me during "Girls Just Wanna Have Fun". believe it or not, my singing was worse than that dancing! 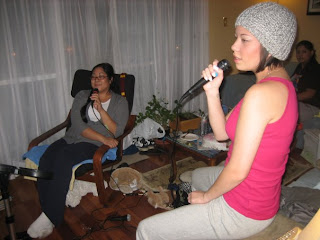 i know what the secret cake ingredient is! ;)

i hope you get singstar for your november bday.