Seven;30 and i went on another fruitful roadtrip last week... lots of paper written and lots of McDonalds eaten (3 times in 2 days!)

we played some interesting car games...i bet you've never thought of new lyrics for Trick Daddy's "Nann" while racing other rentals on the 401!

the hilight had to be when we had 2.5 hours to kill while we were inbetween appointments in Ottawa. we crossed the Quebec border and played some penny slots... i hit 77777 and thought i won a million dollars... when in reality, i only won $4. but thats pretty big when you consider that we were betting a penny! 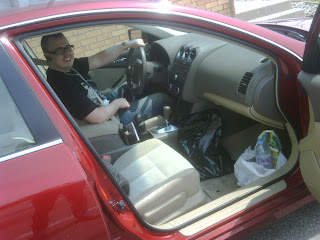 Seven behind the wheel of our rental... only the best for us... a Nissan Altima! :S 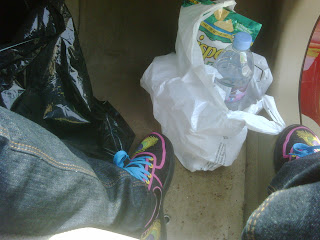 i somehow managed to mess up the rental... right away (5 mins)? i somehow always manage to make everywhere i go messy. my desk, hotel rooms... and now cars. this was only the beginning of the trip. there was food, garbage, receipts, cds and clothes everywhere by the end. 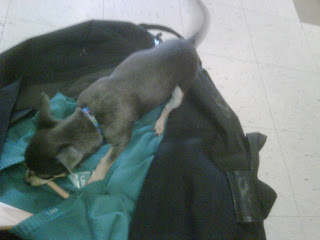 meet Jimmy... the chihuahua puppy at Rockit that decided my sample bag was a great place to roll around. if his owner wasn't keeping such a close eye, i woulda zipped him up in that duffle and brought him home! :)
Posted by killa at 1:29 PM