today was bargain hunting day with Melissa in Buffalo! we both had the same motive... cute shoes/boots. as much as i've been crying over the loss of summer, at least i can have an excuse to buy new shoes. and i'm happy to say that it was mission accomplished for both of us :D mel got the cutest open high heeled oxfords and i got 2 pairs of ankle booties (one leather and the other peep toed patent!). i also left with some new tights (raspberry stirrups, grey/black stripe & lace), a zebra tee and of course, some Vicky's panties 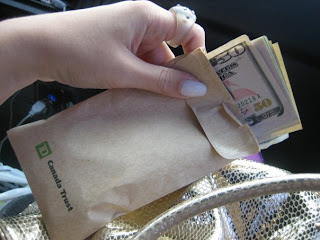 for some reason, whenever i have american money, i ALWAYS carry it around in the envelope i got it in from the bank. classy? maybe i'll start a new trend... who needs rubberbands... 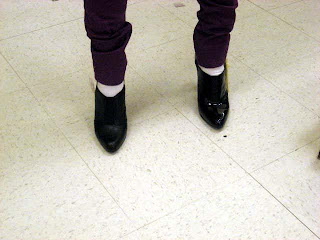 i didn't take my socks off when i was trying on the shoes initially, so i ended up with this weird michael jackson look. not hot. and yes, i was wearing one patent and one leather shoe. 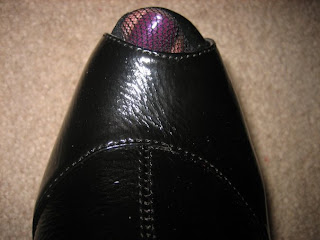 my purple pedi peeking out... 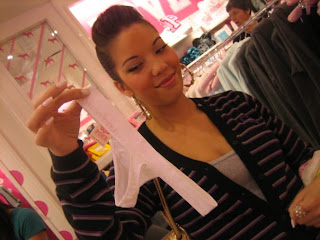 the tinest thong we had ever seen. the picture does not do it justice... i don't even think it could fit a teenager! *shudder* 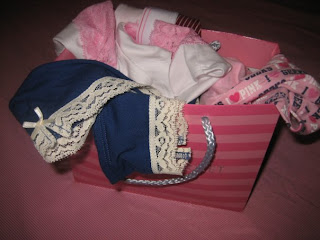 and we can't go to Buffalo without hitting up the Cheesecake Factory... we had the buffalo blasts (again) and chicken littles... but i'm always over stuffed and left feeling like i wanna barf after (i know, TMI). we skipped the fried macaroni & cheese balls because we both overdid it with them in general, but if YOU go, DON'T. they are still one of my fav things everrrrrrrrrr.... 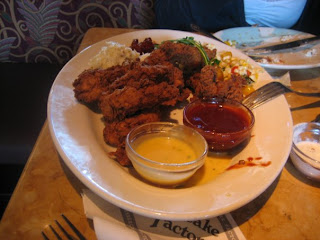 chicken littles. half the portion was eaten by then already (this is AFTER melissa spilled all the dressing ahahaha) 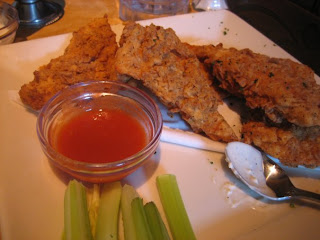 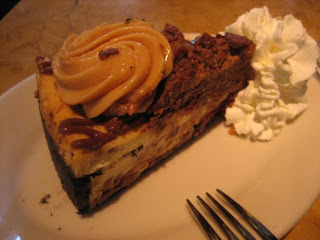 then we had a fun drive home that involved evading customs, Red Bull and question and answer time.

what is your favorite animal? "platypus... it's like a cute bear-duck!!!"

what would you be if you weren't doing what you are doing now? "umm... dancehall queen"

what would you name your kids? "______ insert the multiple names we came up with here"

what a fun day :P

shopping in the buff is always a fun time!

check your hotmail! i emailed you the michael jackson sock/shoe pic! hahaha....

i love my shoes. i have you to thank for finding them!