it's been a while since my last nail post... mostly due to me being lazy and not doing anything interesting. anyways, yesterday consisted of going to the gym (i'm in pain now), eating, watching tv and doing my nails. here is the outcome of the latter! 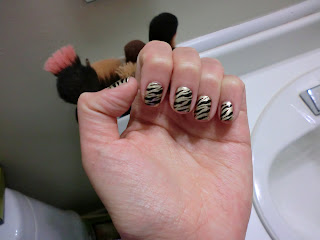 i'm starting to become somewhat of a one trick pony with the zebra... but i keep getting better at it, so why stop now? instead of your traditional black/white route, i decided to make this more of a gilded zebra. who doesn't love a 14k striped pony?
Posted by killa at 7:25 AM