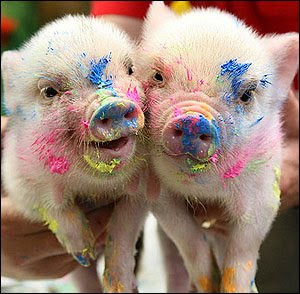 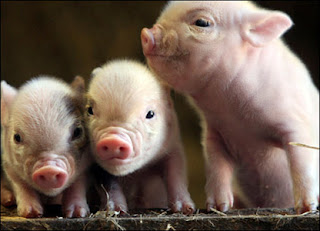 so i was watching the Tyra Banks show (what? it's my alone tv time in the office before the boys get here...) and it was about micro pigs! actually, the majority of the show was about tape worms and the dumb ass chicks who wants to intentionally get one just to lose weight... thank god for the cute piggies they had after to make me forget about their stupidness

so... micro pigs. when they are babies, more than one can fit in a teacup... they don't sweat (except from their nose) so they aren't stinky, they are as smart as most primates/monkeys, can be taught to do tricks AND they can be litter box trained... whats not to like?

christmas is coming up soon... i would like to order a micro pig, with a side of puppy.

you can get one and name it bacon.